The Code of Federal Regulations (2002) stipulates that no part of a crane, or its suspended load, was allowed to work within 3.05 metres (10 feet) of a 50 kilovolt (kV) line and to effect this a dedicated spotter is used to warn the crane operator when any part of the crane breaches the 10 ft distance. Cunitz and Middendorf (1985) put forward several explanations for why a crane could hit an apparently harmless power line; these include poor lighting conditions, over familiarity on the part of the operator, poor training and bad judgement, but that the primary cause was that human eyes are unable to gauge the distance between the crane and power line against an undistinguished sky, plate 1.1. Cunitz and Middendorf observe that the lack of either shadow or other objects against which to make a visual comparison is significant in creating this effect. 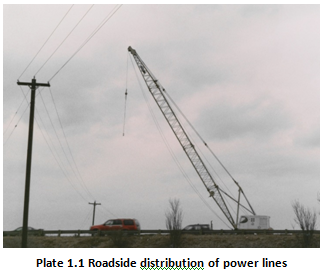 Turner (2004) expresses 20/XX as a measure of visual ability, and can be expressed with 20 ft (6.09 m) as the numerator and the denominator XX being the ability to recognise characters measured in minutes of an arc. On this scale of measurement 20/20 is considered normal, 20/40 is half normal and 20/10 twice normal. Turner suggests a dedicated spotter, with uncorrected vision, should have eyesight of at least 20/13, which is 30% better than normal.

The Department of Labor [2008] considered during the CDAC process the requirement for a visual test for spotters but it was not adopted. However CPLSO recognised the benefit from knowing the ability, or lack of, visual acuity and proceeded to get expert advice.
The standard is the CPLSO 16